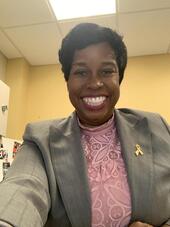 I was created to cultivate environments of positive change.  I was taught at an early age,” If you complain you remain. ”  After serving in the US Army I was employed in the capacity of a Director of Human Resources.  I saw very early through both experiences that there were inequitable experiences and opportunities for persons of color; but what could one person do about it?  I knew to poise complaints to my family would warrant a stern discussion on the many many things I could do.  As an immigrant I was privy first hand to change and faith.

I will first affirm that I would be nothing without my heavenly father who taught me that change would begin with me.  I am indebted to my parents for always supporting and pushing me to be my best.  I am the product of two parents that migrated to the USA in the early 80’s with three children.  Our culture, livelihood and supporting community changed overnight.  Moneys used prior for frivolous use (through the eyes of a small child that is) could not readily be afforded.  As a migrating family there are specific financial constraints that must be adhered to when entering and residing in the USA.  For a family of five we were permitted less than a hundred dollars.  All had to be sold or given away prior.

The blueprint of my professional learning was built by this family unit and a few others.  Specifically an Academic Dean at a small for Profit College in New York City; her name was Elena Estrin.  Of Russian descent she was one of the calmest, accepting persons I had met.  She welcomed all student concerns, faculty challenges and staff interactions with the same degree of interest,  creating a climate of buy in from all who met her. The student demographics were the contrary to her own.  To say that she received the highest level of respect and admiration would be to put it mildly.  The inner-city NYC students had difficult experiences daily and with kindness she listened and attempted to assist where we could.

When I saw the many levels by which she would commit it propelled me to want to do more.  I began volunteering with CUNY/SUNY institutions and eventually self published a coffee table book entitled  The Pink SLIP- HR Secrets for the Displaced Worker.  I volunteered at Career Links and Libraries and even after school programs,  offering free resume assistance and to the unemployed, underemployed and Military.  I learned quickly that it was not enough.

This need to positively interact and understand student needs as they are aligned to curriculum mandated I return to school.  In 2014 I finished my Masters in Higher Education with a focus on Teacher leadership from Penn State.  I relocated to Pennsylvania with my family and worked as a substitute teacher for a few years, before returning to higher education and ultimately beginning my Doctoral degree in Adult Education in 2016.  I concluded this venture in February of this year and I now feel equipped for the learning ahead.  Education leverages the ability to listen and attempt to understand.  It has warranted me the opportunity to be a guest at the table of opportunity as I  learn from others.